September is the beginning of autumn and of a new academic year for many.  Do you have a daughter or son heading off to college this year? 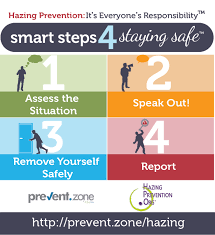 Hazing (US English), initiation ceremonies[1] (British English), bastardisation (Australian English), ragging (South Asia), or deposition, refers to the practice of rituals, challenges, and other activities involving harassment, abuse or humiliation  used as a way of initiating a person into a group including a new fraternity, sorority, team, or club.[2]

Hazing is seen in many different types of social groups, including gangs, sports teams, schools, military units, and fraternities and sororities. The initiation rites can range from relatively benign pranks, to protracted patterns of behavior that rise to the level of abuse or criminal misconduct.[2] Hazing is often prohibited by law or prohibited by institutions such as colleges and universities because it may include either physical or psychological abuse. It may also include nudity or sexual assault. (from Wikipedia)

Be an informed parent and encourage open communication. Proactively support your son or daughter as they move into, what will be for many, their first experiences living independently.