Do you know what COPD stands for?  I didn’t until my father-in-law died from this debilitating disease.  COPD is the acronym for Chronic Obstructive Pulmonary Disease and there is no known cure.  The primary cause is smoking and he was a heavy smoker.  From my memories, he had many of these symptoms by his early fifties:

The five leading causes of death in the United States are heart disease, cancer, chronic lower respiratory diseases, stroke, and unintentional injuries. Together they accounted for 63 percent of all U.S. deaths in 2010, with rates for each cause varying greatly from state to state. The Morbidity and Mortality Weekly Report, analyzed premature deaths (before age 80) from each cause for each state from 2008 to 2010. The authors then calculated the number of deaths from each cause that would have been prevented if all states had same death rate as the states with the lowest rates. Center for Disease Control and Prevention 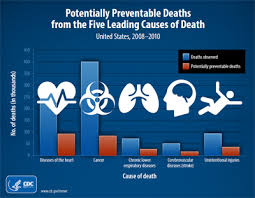 They foound 39 percent of premature deaths from COPD could prolong about 29,000 lives.

Chronic Obstructive Pulmonary Disease, or COPD, refers to a group of diseases that cause airflow blockage and breathing-related problems. It includes emphysema, chronic bronchitis, and in some cases asthma. Learn the lifestyle risks for COPD and QUIT SMOKING!

Chronic lower respiratory disease, primarily COPD, was the third leading cause of death in the United States in 2011.2 Fifteen million Americans report that they have been diagnosed with COPD.3 More than 50% of adults with low pulmonary function were not aware that they had COPD4; therefore the actual number may be higher. The following groups were more likely to report COPD:3

How can COPD be prevented?

Avoid inhaling tobacco smoke, home and workplace air pollutants, and respiratory infections to prevent developing COPD. Early detection of COPD might change its course and progress. A simple test, called spirometry can be used to measure pulmonary—or lung—function and detect COPD in anyone with breathing problems.4

How is COPD treated?

Treatment of COPD requires a careful and thorough evaluation by a physician. 4,5 COPD treatment can alleviate symptoms, decrease the frequency and severity of exacerbations, and increase exercise tolerance. For those who smoke, the most important aspect of treatment is smoking cessation. Avoiding tobacco smoke and removing other air pollutants from the patient’s home or workplace are also important. Symptoms such as coughing or wheezing can be treated with medication.6 Pulmonary rehabilitation is an individualized treatment program that teaches COPD management strategies to increase quality of life. Plans may include breathing strategies, energy-conserving techniques, and nutritional counseling. The flu can cause serious problems in people with COPD. Vaccination during flu season is recommended and respiratory infections should be treated with antibiotics, if appropriate. Patients who have low blood oxygen levels are often given supplemental oxygen.

Learn the lifestyle risks for COPD and QUIT SMOKING!