Our ability to communicate with people is vitally dependent on our ability to understand speech. As Helen Keller, once said, “Blindness cuts us off from things, but deafness cuts us off from people”.  Many take their sense of hearing for granted, until they begin to lose hearing acuity.  Hearing is what connects us and enables us to socialize and communicate. Hearing loss can lead to social isolation, depression, and cognitive decline in the aging population.  Please check out the links Ronnie Das has provided in the information below. They are filled with excellent sources that will educate you about hearing and hearing loss!

Yearly, unaddressed hearing loss costs an estimated $750 billion worldwide, according to the National Institutes of Health.

World Hearing Day 2020 is on March 3rd and this year’s theme is, “hearing for life: don’t let hearing loss limit you,” according to WHO.

People of all ages can develop hearing loss from noise and because damage from noise exposure is often gradual, you might not notice it, or may ignore the signs of hearing loss until it is too late.

Hearing screenings are a quick and cost-effective way to determine if someone is experiencing a hearing problem. 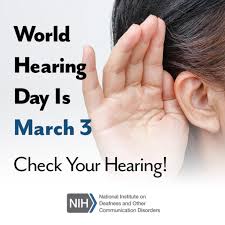 Sound is measured in units called decibels (dB). An increase of 10 dB seems about twice as loud to your ears, but it’s actually 10 times more intense, or powerful.  Noise can damage tiny sensory hair cells within the cochlea—the small, snail-shaped organ for hearing in the inner ear, according to Noisy Planet, a science-based program developed by the National Institute on Deafness and Other Communication Disorders, part of the National Institutes of Health. The program is part of a national public education campaign is designed to increase awareness among parents of children ages 8 to 12 about the causes and prevention of noise-induced hearing loss.

Moving away from noise or lowering volume are simple ways to avoid loud sounds, but earplugs or protective earmuffs are also available when you can’t easily avoid the noise or control the volume.

A 2016 study showed 42 percent of the participants who did not use earplugs at a concert experienced some hearing loss. According to a 2018 study by the Centers for Disease Control and Prevention, only 8% of US adults say that they regularly wear hearing protectors at loud athletic and entertainment events.

Tinnitus, or ringing in your ears that can be caused by exposure to loud noise, was found in 12 percent of the participants who wore earplugs, versus 40 percent of the participants who did not use earplugs. Using earplugs correctly can be trickier than you might think. If you don’t insert them properly, they won’t protect your hearing as much as they could—and perhaps not at all. (adapted from an article by Ronnie Das, WLNS.com)